The Bennie L Williams Spiritual Voices is a Denver community choir, founded in 2013 under the direction of Ms. Bennie L. Williams. Its creation met a desire to preserve the music of Africans enslaved in North America during the 18th and 19th Centuries and perform it at a high standard. Under Ms. Williams’ direction and insight, the choir performs these songs with passion and enthusiasm that honors the ancestors and respects the spirit and message of these songs born out of pain. Their messages remain as relevant today as in the past. Musically, these profound songs underlie characteristically American music, such as gospel, jazz, blues, R & B, and hip hop.

Straining under the cruelty of slavery, communities expressed their humanity and independence through coded songs for escape and defiance and religious songs of transcendence. Today’s concert reflects the variety of these songs. When allowed religious expression, slave communities adapted Old Testament stories to sing of freedom. In “Joshua Fit the Battle of Jericho,” recently freed slaves face and defeat a superior army of Philistines. “Rock-a-My Soul” expresses the for a peaceful place of rest in the bosom of Abraham. “Rockin’ Jerusalem” provides a path to escape earthly chains by attaining heaven in the afterlife.

“There Is a Balm in Gilead” sings of the community’s power to support its members by answering Jeremiah’s Old Testament questions with the affirmation that “there is a balm in Gilead, to heal the sin-sick soul” and “to make the wounded whole.” Slaves defied slaveowners in songs like “Every Time I Feel the Spirit,” praying in their own way and celebrating deliverance and freedom. Religion emphasized that slaves did not suffer their trials alone, but with the courage shown by Jesus, slaves could go on. For that reason, “I want Jesus to Walk with Me.”

BENNIE L WILLIAMS was born and educated in Marshall, Texas. She taught music in Denver Public Schools, including many years at George Washington High School. Before founding the Spiritual Voices, Ms. Williams was Artistic Director for The Spirituals Project Choir for twelve years. She created Sankofa, a smaller ensemble of singers, named after an African adinkra symbol of wisdom, associated with a proverb, “It is not wrong to go back for that which you had forgotten.” Sankofa teaches that we must go back to our roots to move forward, to gather the best of what our past has to teach us to reach our full potential. The preservation of spirituals brings the wisdom of the past to our present and future lives.

Ms. Williams’ philosophy of directing the choir is for song to reflect the emotional richness of surviving spirituals. She wants choir members to get outside their 21st Century Denver lives to find what the message of the song is; or what Ms. Williams calls the “spirit and cadence of the song”. A “work” piece has one feel to it; a song “pleading” for relief has another. One of her frequent saying is: “You can sing all the notes right, but if you don’t impart the meaning of the song, why bother.” Bringing not only the accuracy of the music, but the spirit of the music, to our audience is what sets this group apart from others.
CARMEN COLEMAN, a Colorado native, holds a B.A. Degree in Music from Howard University and Master’s Degree in Curriculum and Instruction from The University of Denver.
Ms. Coleman has served as Performer/Director of Music for numerous events and Chorus Master for Central City’s production of “Show Boat” at the Buell Theater and Music Director/Producer of The Rocky Mountain Children’s Choir (Denver). Her work with Bread and Roses (Corte Madera) included productions for Bonnie Raitt; Carlos Santana, Pete Seeger, Keb’ Mo, Pete Escovedo, and Sheila E.
LaDAMION MASSEY comes from a musical family and has been involved in music since he was a child. At the University of Northern Colorado, LaDamion was an opera chorus member. He also nurtured his passion for jazz where he performed in the top ensembles Vocal Jazz 1 and Et Cetera. After leaving UNC, LaDamion continued to perform in the a cappella vocal jazz sextet, Groovesociety. In 2006, the group received “Best Vocal Group of the Year”, “Best A Cappella Album”, “Best A Cappella Song” by the JPF International Music Awards. In 2011, LaDamion graduated from Metropolitan State University of Denver with a degree in Music Education. Currently, LaDamion has recently been named the director of the acapella ensemble at Regis University, and is in his 3rd year as the choir director at St. Thomas Episcopal Church. As a performer, LaDamion has shared the stage with Grammy Award winning bassist Oteil Burbridge, keyboardist and founding member of Parliament Funkadelic, Bernie Worrell and Colorado’s own funk band, The Motet
BENNIE L WILLIAMS SPIRITUAL VOICES has gained well-deserved acclaim performing choral arrangements of Negro Spirituals. The group of forty members has performed in the Denver at the Heritage Festival of Negro Spirituals in Baton Rouge, Louisiana and the Whitney Plantation in Wallace, Louisiana. 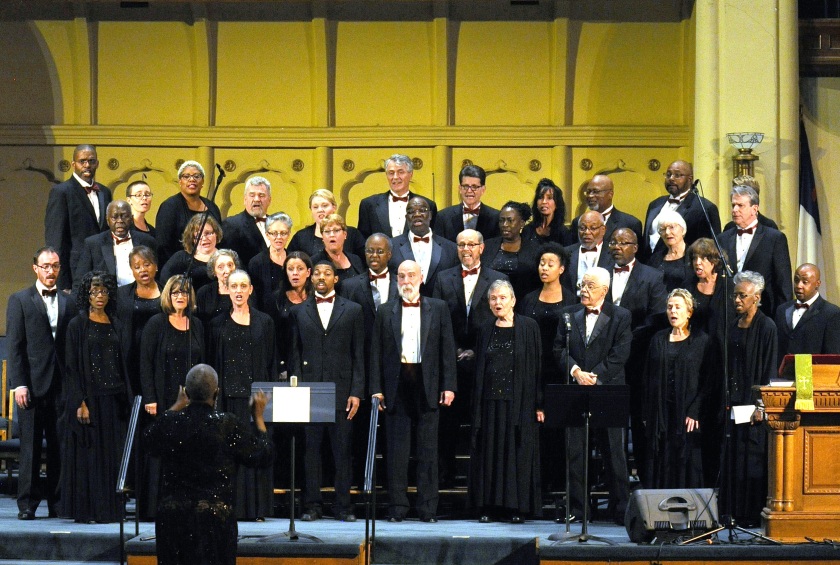